Few milling operations are as hard on blowers as the U.S. Durum Milling plant along the Mississippi River at the south end of St. Louis, MO.

That’s especially true for a pair of 150-hp blowers on the mill’s ground floor. They generate roughly 14 psi, +/-1 lb., to blow finished semolina flour through a pair of 8”- diameter, 1,100-long pipes, which carry the flour to a Borden pasta plant to the south of the U.S. Durum Milling property. Borden is one of U.S. Durum Milling’s major customers, though not the only one.

“Until 1991, the original blowers on those pneumatic lines wouldn’t last long in that application,” says Mark Williamson, director of milling. “They were running nearly 24 hours a day, seven days a week.”

According to Mark Dexheimer, a maintenance worker and millwright at the plant, one of the two blowers blew out its seals in 1991 and began throwing oil. This was after the unit had been rebuilt once. The company decided to try something different. 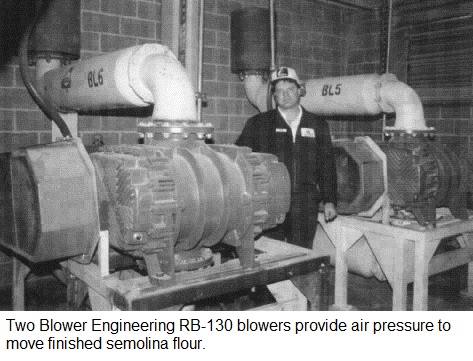 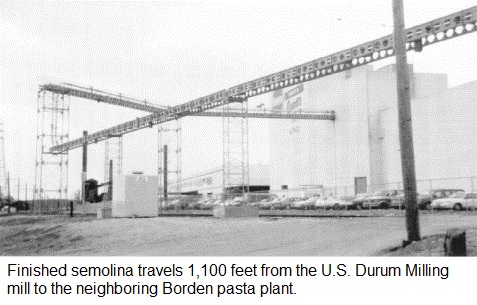 After looking at a number of blowers, U.S. Durum Milling selected an RB-130 blower from Blower Engineering Inc., Lewiston, NY (800- 388-1339). One of the most notice able features of the RB-130 is its large size compared to the original blower — 26’ wide x 32 long x 25’ high for the Blower Engineering model vs. 19” wide x 40” long x 21” high for the older blower. Dexheimer notes that the steel frame on which the older unit had been mounted had to be extended out to accommodate the RB-130.

Tom Byrnes Jr., vice president of Blower Engineering, comments that the beefier design of the RB-130 blower allows it to generate the same level of air pressure with less energy. It also operates with less vibration, contributing to longer work life.