The ADM Milling plant at Hudson, NY, which produces flour from hard wheat in two milling units, was having continuing problems with a pair of blowers moving flour through a 6’ conveying line. The system included a 125-hp motor that drove the two blowers running in parallel. They supplied air to the 290 conveying line, 200’ horizontal and 90’ vertical, with a capacity of up to 450 cwts. per hour. Line pressure was 10 psi. The problem was that the blowers were not sturdy enough to with stand the heat generated in the production process. They would develop oil leaks, and without lubrication for the gears and bearings, they quickly broke down, halting production. The line had gone through four blowers in less than a year.

The plant superintendent at Hudson knew he had to take drastic steps when both blowers on the line had to be replaced within 48 hours. He and the plant manager contacted ADM Milling’s regional superintendent and milling engineer at their headquarters in Sauna, KS.

The milling engineer suggested using a new, heavy-duty blower from Blower Engineering Inc., Lewiston, NY (800-388-1339). One of Blower Engineering’s blowers had been installed several months earlier at a business not far from ADM Milling’s Sauna offices, and the engineer had been impressed with its durability, energy efficiency, and low noise production.

At Hudson, engineers calculated how much air volume would be required for the 290’ line and relayed that information to Blower Engineering. Based on that information, the Blower Engineering recommended installing a single RB-100 blower, capable of producing up to 1,300 cfm air volume. The blower came complete with base, discharge silencer, intake filter/silencer, belt guard, check valve, pressure relief valve, gauge, and drive. The package was shipped completely assembled to Hudson. ADM Milling supplied and mounted its own 75-hp motor to run the blower. The old blower package was removed, and the new RB-100 was placed in position and hooked up. 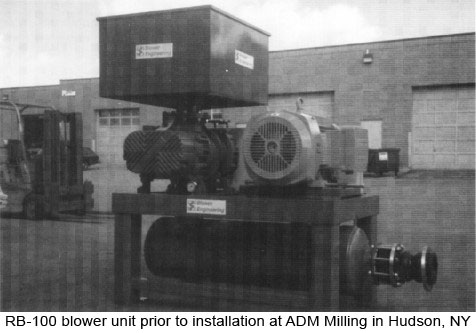 When the motor was started, the maintenance staff wasn’t quite sure the unit was running, since the RB- 100 was inside a blower room, and they could not detect any increase in noise over the other blowers in the room.

After they determined the blower was operating, they introduced flour into the air line. The line pressure was noted at 9 psi, and the amperage draw on the motor was 40 amps less than the old blower package. The volume of flour moved was roughly the same as with the old package, and the pressure and amp draw remained constant over the continuous 24 hours that it was monitored. The RB-100 also ran at a cooler temperature than the previous blowers, and electricity saved by the unit allowed the plant to pay for the new installation in less than eight months. Specialists at Blower Engineering cite several reasons for the improved performance:

Since the installation of the RB- 100 blower package, ADM Milling has approved two other blow lines for changeover to the new heavy- duty blowers.